10 of the Coolest Movie Theaters in America! 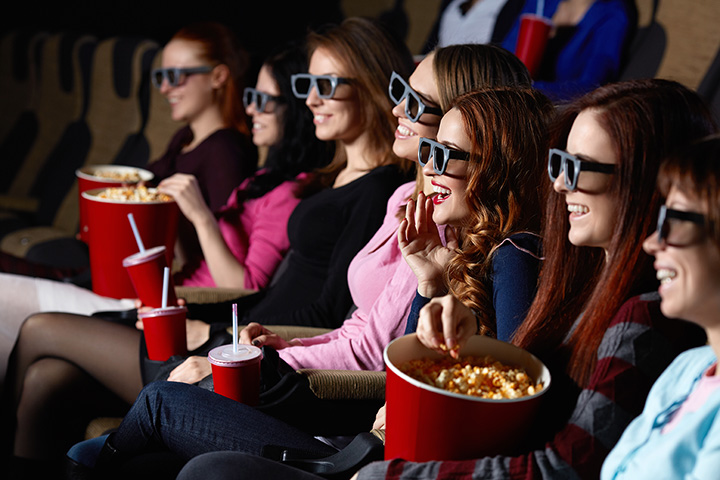 The first movie theater in the United States was the Nickelodeon, opened in 1905 in Pittsburgh and cost five cents for admission. The theater was inside of a storefront and wasn't particularly extravagant.

Today, movie theaters are exceptional structures with a variety of luxuries that expand much further than just a movie-watching experience.

According to Theatrical Market Statistics, U.S. and Canada box office was $11.1 billion last year, which was an 8% increase year-over-year. So people are still flocking to theaters in masses to see new blockbuster releases and independent films.

Watching something on a massive screen with top-notch sound and surrounded by a bunch of people who all enjoy the same thing is an exciting event.

There are hundreds of movie theaters around the country that offer unique experiences, theaters that are definitely worth traveling for.

Here are our picks for the 10 coolest movie theaters in the U.S.

What makes this theater so special is how it kind of doesn't feel like you even left your living room to watch the movie. The New Parkway Theater is designed with mismatched furniture to mimic what someone's apartment might look like, creating a relaxing and laid back atmosphere. There are couches, coffee tables, upholstered chairs and bean bags. Sitting in this theater to watch a movie sort of feels like gathering around your television (albeit a pretty big one) with a bunch of your friends for a movie night.

If you really want to capture the feeling of a classic, 1950s drive-in movie, you should consider visiting the Sci-Fi Dine-In Theater Restaurant at Walt Disney World. This place is set up with rows of tables designed to look like old convertibles, facing a movie screen that plays retro sci-fi films and cartoons while you munch on classic diner foods like burgers and shakes. This place will really make you nostalgic for an era you might not have even been alive to see.

According to its website, the Film Forum began in 1970 as "an alternative screening space for independent films, with 50 folding chairs, one projector and a $19,000 annual budget." The Forum regularly screens classics on 35 millimeter film, truly giving its audience an authentic experience. If you aren't looking to watch classics, you can also view new, independent films that wouldn't be released in major movie theaters.

The Alamo Drafthouse, founded in 1997, is a cinema chain with 12 different locations. The coolest location, though, has to be in Austin, Texas where the theater was founded. Entertainment Weekly called this spot the best theater in the country and Wired.com deemed it the coolest movie theater in the world. The theater offers a variety of beers and food to have while you watch cult classic films. Fun fact: Director Quentin Tarantino occasionally stops in when he's in town.

In the mood for a creepy movie-watching experience? Cinespia, an organization that hosts on-site screenings of classic films in and around Los Angeles, hosts outdoor movie nights in the Hollywood Forever Cemetery. So not all of the movie watchers surrounding you are alive. The list of famous actors, singers, screenwriters, and directors that are buried at this site is seemingly endless. Some notable celebrities buried there include actor Mickey Rooney, actress Joan Hackett and Charlie Chaplin, Jr.

Interesting fact: If the temperatures reach 100 degrees in the summer, this theater will let you come watch movies for free. The movie schedule varies with options to watch art house films to the brand new, popular releases. According to its website, the theater has world-class picture, screen and a 16,000 watt Dolby Digital sound. Michael Moore, an Academy Award-winning director, is the volunteer programmer and helped to bring this place back to life. The venue was originally built in 1916 and opened then closed multiple times for various reasons. In 2007, the theater was refurbished and reopened. Motion Picture Association of America honored this place by naming it the No. 1 movie theater in the world.

Opened in 1939, this 900-seat, award-winning landmark shows first-run films as well as classics. In 1989, the theater was placed on the National Register of Historic Places, an enormous honor. A lobby decorated with original terrazzo floors and an impressive 40-foot curved screen are just two things that make this place special. The screen is hidden behind a huge gold curtain before the show begins, adding to the old-school feel of the place. Visit their website to see classic, black and white photos of the theater from its earlier days but really capture the magic of it by stopping by to watch a flick.

As many of these popular theaters do, the Tampa Theatre screens both new and classic films. Opened in 1926, this is more than just a theater. Inside, there is a Mediterranean courtyard adorned with flowers and gargoyles. Up above on the ceiling, there is a night sky image with sparkling stars. This movie palace captured the hearts of its visitors right when it opened up. According to its website, it "remained a jewel at the center of Tampa's cultural landscape" and "generations of people stole their first kisses in the balcony, followed the world through the newsreels and grew up coming to the Theatre week after week."

The Studio Movie Grill is a popular megaplex with locations from Arizona to Georgia, but the Illinois spot may be the most notable. This theater provides arguably the best in-theater dining experience in the country with a delicious selection of foods including scrumptious burgers, fresh salads and sweet desserts. They'll even offer alcoholic beverages that go along with a newly-released film for a limited time. The Studio Movie Grill offers premium seating with trays that flip around right above your lap for a relaxing dining and movie-watching experience.

This theater has been hosting a long list of Hollywood premieres since its opening in October 1936. Jacob Zink was the mastermind behind this structure, who also designed over 200 different theaters across the country. The 70-foot long and 40-foot wide screen is the largest in the area, and is considered one of the best in the country. The theater hosted the world premiere of 2001: A Space Odyssey on April 2, 1968 and the world premiere of Jurassic Park on June 9, 1993.